Secrets abound in the Our Bachelor Mansion, a vengeful foe is out for blood, and Isla’s ready to fight to win werewolf Sky’s heart…if another doesn’t run away with it first.USA Today's Bestselling Author Cyndi Faria introduces book 2 in her Vampire Final Rose series, a Paranormal Chick Lit romcom...Isla may have received the First Impression Rose, but she doesn’t feel safe. There's something going on with werewolf Sky, something Isla can't yet put her fangs on. But, for the first time, she doesn't want to leave Our Bachelor, she wants to fight to win Sky’s heart.Too bad Sky’s ex unexpectedly shows up asking for a second shot at love. Winning Sky’s heart during the group date will be tricky with Isla’s bloodlust on the rise, a murder investigation, and the appearance of an unexpected guest.Some women compete for Sky's heart, and others, Isla suspects, are out for blood. Isla believes both she and Sky are still in trouble. One thing is for sure, the stakes just got a lot higher with a one-on-one date card on the table. Sky's playing for keeps. Can Isla? 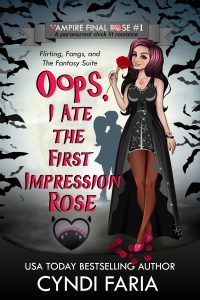