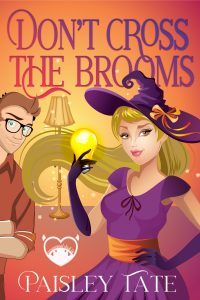 Emma finally meets a man who lights her up..until she turns him into a floor lamp.

After spending years trying to get her magic to behave, Emma finally admits the truth. She’s the worst witch ever, and she should just give up. On magic. On any hope for love. Until her cousin convinces her to try a magical dating app, and it pairs her with a gargoyle shifter named…of all things…Stone.

Stone didn’t want to come to Salem. But when his boss at the Agency of Magic, Unusual Licensing, and Extraordinary Things orders him to track down a demon who’s eluded capture for more than twenty-five years, he doesn’t have much choice. AMULET wants the trickster contained, but every time Stone gets close to the demon’s magical trail, it turns colder than frostbite.

What's a gargoyle shifter supposed to do with his downtime when he's on assignment in a strange town? Sign up for a dating app, of course. It’s all fun and games until he gets turned into a lamp and thrown in the trunk of a car—with an unconscious Emma.

Will he ever be flesh and bone again? Or will an unknown force harness the demon’s magical energy for their own dark purposes and leave Emma and her lamp in the dark…forever?